Sheffield Hackspace has setup and installed a LoraWAN (The Things Network) gateway.  LoraWAN is a new technology that enables small amounts of data to travel large distances with low power and the best bit of it is….its free!!  This is being used by universities, corporations and hobbyist a like to transmit data such as air quality, traffic, temperature, gps informational ect. from battery (or wire) powered devices that last up to 10 years and more. 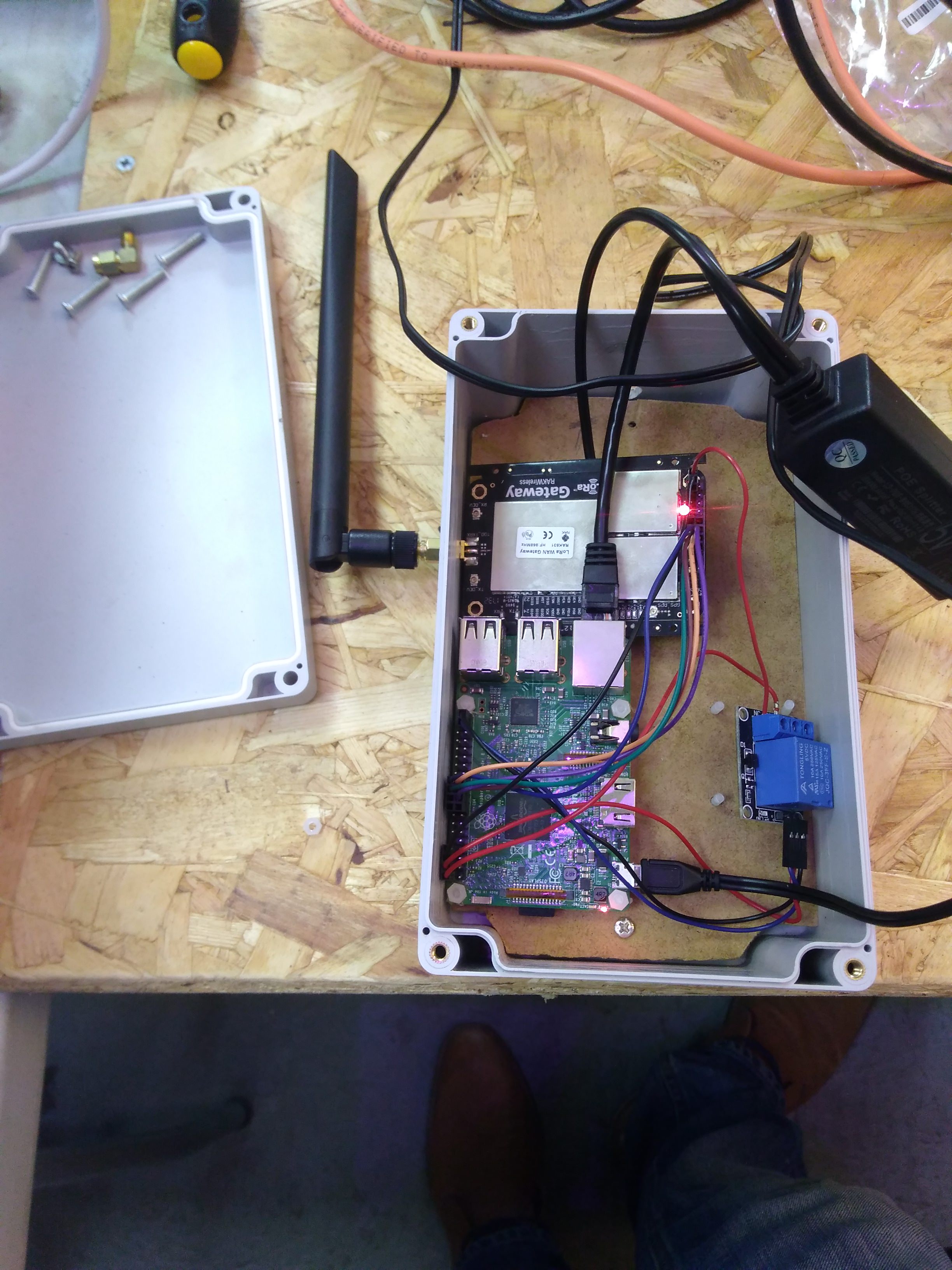 Come to the Sheffield Hackspace to learn about this new technology and make use of the gateway to prototype your idea.  If you want to make your own gateway and add to the things networks, come and learn how to do that.  See if your area has a gateway installed by clicking the link here.

For our gateway, we used a Raspberry Pi and RAK 831 to receive multiple frequencies at the same time. For some unknown reason the RAK 831 use to switch off occasionally so we’ve added a on/off relay (as can be seen in the photo) to power recycle it automatically/remotely when when it stops responding to the Raspberry PI. Hopefully we’ll find the root cause.

J5 is alive, and is definitely not called johnny or a robot in a kids sci-fi film. J5 is the mystery connector footprint on the bottom of the Pi Zero. I have been puzzling over what it was intended for since getting my Pi Zero from Pimoroni.  Asking around amongst those who would know more than me about it (Not difficult to find) the hot favourite was a JTAG port but no one was entirely sure and there was no pinout. An extensive google around was surprisingly information free.

Time then for some reverse engineering, first stop was a USB microscope and a look see for obvious pin functions, gotta tackle the low hanging fruit first. Taking pin 1 to be the pin nearest the J5 ID we can see the footprint is for an 8 pin connector and the body or screen is not connected. 1 is the Pi system reset or run pin as it is labeled, 4 and 7 are ground connections. OK that leaves 5 pins to go. I visually traced the connections and lost them in to the maze of CPU via’s. As other than the reset they did not go to the GPIO pins I could rule out an easy hit as to what they were. The up side is if they were JTAG, it would have to be dedicated pins, not GPIO pins, and therefore projects could be debugged even with a phat in place. Hmmm what were those other 5 pins for. Normally at this point I would start on in with a multi meter or a scope and see what I could find out next. But serendipity smiled upon me, in that way it never normally does.

Putting some time into a side project (building a Graphite graphing server) I was working with a Raspberry Pi B+. Purely as I tend to mostly use Pi2’s now and was using up any older ones that were lying around. Embedding them irretrievably into other things. Fiddling with the board during one of many mental luls, I noticed the same mystery footprint on the board directly under the HDMI video connector. In fact it is so much the same it is also labelled J5. Cross referencing the ground pin outs that we know from the Pi Zero we get a match. What is more the 5 pins we had not identified are broken out to pogo pin pads bang next to the footprint. All along with nice labels. Combining the data we have then gives us the following table:-

Some further technical info on TAP & JTAG can be found here worth a look at to illustrate some of the concepts behind JTAG. OK, all well and good, what is left to do, identify what sort of connector J5 actually is and make up a JTAG lead for it then connect it up and see if we are right.

Several members of the group attended Geeks in the Peeks recently (4th-6th September 2015). As part of this on the Saturday, we decided to take my Kite Aerial Photography rig to the top of Mam Tor to see if we could take some photos. I brought along my Raspberry Pi based system (A model A with a camera module, air pressure sensor, USB wifi card (for the web UI preview and start/stop/shutdown buttons) and LiPo battery) which takes images every 7 seconds, on average while airborne.

The wind was nice and smooth and resulted in the Kite flying very stably. This helped produce some very clear and well focused images with little smearing effect (common in gustier winds). See below for some examples…

Relative Altitude data for period of use.

NB: In the graph above, you can see that towards the end of the flight, the camera appears to be below the starting altitude. This is caused by the kite camera taking the initial reading on altitude (based on air pressure) while it is already some way up above it’s ground level starting point (it takes a little while for the Raspberry Pi to actually boot up to the point it can run the code to control the camera). However, as you can see the highest image was taken at 40m above the start altitude. From the spreadsheet the Pi makes, I can tell you it was image 29.

Image 29, highest in the series.

Kite and camera in flight above Mam Tor

From the above you can see the Kite clearly in the sky as well as a brown spec hanging from it, this is the Raspberry Pi kite camera hanging from a Picavet device (this allows the camera platform to always be level while in flight suspended below the kite’s string).

Comedy moments… Andy restrains AJ to prevent him being pulled away by kite.

For more information of Kite Aerial Photography, start with Wikipedia and see how you get on. However, if you have any questions or a desire to see a full & in-depth article on KAP, please leave a message below and I’ll be sure to start work on it. There is also a great YouTube video from the folks at Make Magazine here, this was in fact the original inspiration for me to get into Kite Aerial Photography after I left University.

For more information on Geeks In The Peaks, please see their Twitter & attending.io pages.

After advocating for a while that it is worth running up services on Pi Servers one at a time as needed. It occurred to me that we have no UPS to keep them going when the mains electricity drops out. We also have no way to prompt services to shut down in an orderly manor under the same circumstances. This gets to be more critical when we are running infrastructure services like RfID door access and a space automation MQTT broker.

An uninterruptible power supply for the Raspberry Pi

Being as I am also running similar services at home I needed a similar solution for home. Sounds like a call to hack then, first stop was the junk and scrap bins, then a quick rummage through the spare bits left over from Chinese AliExpress shopping trips.

I found an ex UPS maintenance free lead acid battery that had sat in the scrap bin for too many years and a couple of these tiny 3A SMPSU DC-DC switcher modules that are incredibly cheap. The SMPSU modules can cope with up to 28V input and the output voltage is set by a small potentiometer. I also found a scrap laptop PSU that had a decent current delivery at under 24V. All in all the most expensive bits were the screw terminals that you can see from the picture I used to make conections to the board.

Lead Acid batteries have the useful property of being low maintenance and they will take a float charge providing you supply them with a constant voltage at the maunfacturers reccomended value. They will sit there on this float charge for as long as the battery will live. So after a quick rummage on the internet the first switch module was adjusted to provide a constant voltage at the manufacturers reccomended float value of 6.85V for the battery shown. The battery and input to the second switch module were conencted in parralel across the output of the first switcher. The ouput votlage of the second switcher was set to the 5.1V that is best to feed Pi’s with.

That then was the prototype UPS finished. When the supply to the UPS fails the battery takes over and supplys the Pi. When the mains supply comes back on the battery goes straight onto float charge and the Pi is running from the mains. Providing that the battery float voltage is less than the supply voltage and the Pi voltage is less than the battery voltage it all works. At 6V these thresholds are all a little close together and the UPS could do with a 12V battery and then adjusting to charge at that voltage instead. But this does work and the concept is proved.

The next task is to scale this up to run a whole shelf of Pi’s, with a mains high current SMPSU to drive the float voltage and supply the Pi’s, a salvaged car battery for the uninteruptible bit and one of these cheap tiny DC-DC SMPSU’s per Pi. But that is another article for another day.

On May the 9th of the November the Sheffield Hardware Hackers and Makers participated in the Maker Day at Sheffield Hallam University. In this event we had three 3D printers, one of which was the SHHM’s Mendel 90. We also had a large collection of small projects that members had made (including a Geiger counter). As well as one or two Raspberry Pi’s. On top of this we had some Arduino projects witch featured some RGB LEDs.

The three 3D printers that we had on display in the picture above where (from left to right): A Reprap Huxley, a Reprap Prusa Mendel and a Mendel 90. The Mendel 90 was being driven by a Raspberry Pi. The Pi had Print Run installed on it, the open source software for driving 3D printers with. This allowed us to have full control over the printer just as you would if you where using a computer. The slicer settings still needed setting up on the Pi, but you can still take a look at the time laps below.

The printer was printing a small Android fridge magnet test piece.
This 3D printer being driven by the Raspberry Pi, called a “Mendel 90” was built at a event called “Festival Of The Mind” this took place over two days on a weekend where 5 of these printers where built.

The selection of projects that members had brought along to the maker day included: A Geiger counter, Arduino controlled egg incubator and Arduino controlled ambient lighting. All of these kits had been made from scratch by group members.
We also had another Raspberry Pi set up with Scratch on for people to play on and learn.

The next group meet up will take place on the 25th of November at Access space. New members are always welcome! For more Information on meet up’s and the group you can visit our Forum
Or alternately you can follow us on Twitter @SHHMakers